More than 500 attended the Pike Road School dedication this weekend. Click here to view a recap of the event from the Montgomery Advertiser.

Rebecca Burylo , Montgomery Advertiser: If you asked what makes the town of Pike Road special, Mayor Gordon Stone would tell you it is the people. More than 500 residents and their children joined him in dedicating the newly opened Pike Road School on Sunday with thanksgiving and prayer.

Parents, students and visitors were each given a key upon entering the gym assembly. Inscribed were the simple words, “Welcome Home,” the same words that are on the town seal.

The ceremony was a reflection on how far the town has come, a charge to maintain the characteristics of home and a look ahead to the possibilities of progress.

Stone, the Board of Education and Superintendent Suzanne Freeman thanked the many families, city leadership, legal council, businesses and legislators that made the dream of Pike Road and Pike Road School a reality.

“This has been a dream for many, many years. The citizens of our community back in 1997, when we appropriated, said we now can return public school to Pike Road,” Stone said.

Stone said they had to overcome much in order to preserve their way of life and keep their area unique. It wouldn’t have been possible without the daily support of community residents, Stone said.

“It’s unique because not many places have the chance to establish a town from scratch, build a school system from scratch, build a campus from scratch and now have the first school dedication, so for us it’s another opportunity to remind people that with determination, with their willingness to persevere, to have a vision, they can make this happen,” Stone said.

A resolution creating Pike Road Schools and separating the town’s public school system from Montgomery Public Schools was passed by Stone and the Town Council in 2010. Each year, another grade level will be added.

Currently, more than 1,000 students are enrolled in Pike Road School, from kindergarten through eighth grade. Their first day of classes began Aug. 13.

Cecile Rice is one mother who saw what Pike Road was doing and wanted her family to be a part. Moving to the town of Pike Road a few weeks ago with her three school-age children, she’s excited for her twins, Matthew and Kendall, who just started sixth grade.

“It’s very exciting,” Rice said. “My kids have enjoyed it so far and are excited about the project-based learning. It’s a curriculum that is more hands-on.”

The community’s concept for the new school was to “change the way of learning” in order to create life-long learners, according to Freeman, who is also the school’s principal.

“Our mission for Pike Road School is to create a culture for children that inspire curiosity, to think, innovate and create,” Freeman said.

The keys provided at the beginning of the ceremony represented the keys to success and each letter represented a mission to the town, said Stone. K is to Keep it going, E is to expect greatness, Y is You are important and S represents Selfless and a Servant-heart.

During the ceremony, kindergarten parents had the opportunity to write letters to their children, seal them and have drop them into a large “treasure chest” at the front of the stage that will act as a time capsule.

Children will be able to open their letters on graduation day, 13 years from now.

Ray Hawthorne, the president of the Pike Road Board of Education, reminisced of when he and his wife moved to Pike Road about 10 years ago before opening the program in prayer.

Hawthorne was instantly impressed by the way the town, both young and old, “cared about its neighbors, cared about the town and cared about one another.”

He then asked the crowd to stand, hold the hand of the person next to them and bow with him in a prayer of dedication.

“We’re here today, because God saw fit to have a school in Pike Road,” Hawthorne said. “As a family, as a community and as the town of Pike Road, I think it’s important that we acknowledge God in all that we do and he will direct our paths.” 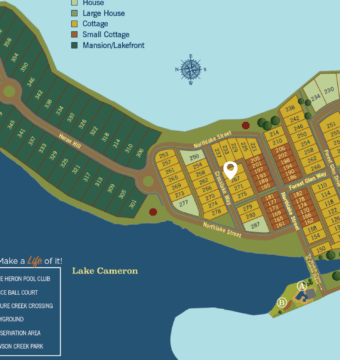