On June 6, 106 members of the first graduating class of Pike Road Schools will receive their diplomas.

“They will graduate outside in our new Patriot Stadium,” Pike Road High School Principal David Sikes said. “We will limit the number of people that are allowed to attend. Each senior will receive four guest tickets.  The ceremony will be livestreamed for those that cannot attend.  The ceremony will also be recorded and hosted on our website for later viewing.”

Alabama Superintendent of Education Dr. Eric Mackey will be the guest speaker for the ceremony, which will begin at 9 a.m., said Rebecca Williams, federal programs and communications coordinator for PRS.

The PRHS student body will not be able to attend the event in person due to COVID-19.

Century Church hosted Project Senior, a virtual event carried on Facebook live for the entire Pike Road community to show its love and support for the seniors.

“The event gave them a virtual senior party and showed how excited and proud our community is of this group of students for persevering during COVID-19. Century Church showered the class of 2020 sending them off with a virtual celebration!” Williams said.

In addition, the PRS Board of Education and Town of Pike Road commended the class of 2020 with ads in the May edition of ‘Montgomery Parents’ magazine.

The faculty and staff at Pike Road High School encouraged all 106 of seniors to submit their personal information to the ‘Montgomery Advertiser’s’ salute to seniors. 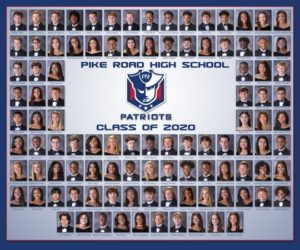 Williams said that Lamar Advertising and Mashburn Outdoor also both donated several digital billboards to honor the class. “We are so extremely grateful to both companies for their generosity,” Williams said.

PRS staff also created wonderful videos from the seniors for their classmates and teachers.  The videos were sent via email to the student body and posted on the PRS Facebook page. The PRS office of communications also is spotlighting several seniors each day on the district’s Facebook page.

All the effort has helped keep spirits high among the graduates, their families, and the PRS faculty and staff.  “I think not having the traditional senior ceremonies and events is more difficult on the families and faculty and staff.  The seniors don’t know what they are missing because they have never experienced it,” Williams said.

Sikes said the PRHS faculty has done an amazing job reaching out to seniors each week, to check on them, ensure all their questions are answered, and that they are on track to graduate.  “The PRS family is really good about looking after each other,” Sikes said.

The class itself excelled in many ways, showing up in the amount of scholarships made available to the group. In all, at least $5.5 million in scholarships were offered to the class, which had a 99 percent graduation rate.

“Since this class is our inaugural graduating class they have not had the advantage of witnessing another senior class go through this process. They are self-starters and leaders. They will do well in all their future endeavors,” Williams said.

The class of 2020 moved to three different buildings during their time at PRHS and have been the oldest group of PRS students since the inception of the school system in 2015.