It is hard to imagine that “the best is yet to come,” but that is exactly what an official with The Waters recently said.

Oh, by the way, there is a chapel on the grounds and Pike Road School, which is currently kindergarten through eighth grade, but will eventually be a K-6 after the Pike Road district builds a second school next year.

There is a town center, which will shortly have 10 businesses and room for another three or so.

“The Waters is a unique community – there is nothing like it – not just in metro Montgomery, but all over the State of Alabama and really it’s unique in the South,” said Tommy Brigham, who is the managing partner of the Arc Opportunity Fund that owns The Waters. He is the partner and chairman of Birmingham-based ARK Real Estate Strategies.

“Having 62 percent of your total land mass in either water or greenspace is a tremendous amount of walkable terrain. The green and water spacing allows people to have a unique living experience.”

Remember that “the best is yet to come.” How can it get any better? A new neighborhood is being developed at The Waters, which actually calls its neighborhoods hamlets. The new hamlet is Dawson Creek. “The Dawson Creek peninsula is spectacular,” Brigham said.

It’s the lakefront views that Brigham was raving about with water on three sides. The first phase of Dawson Creek will feature 89 lots in a wooded area and construction of homes is scheduled to begin in June. The Waters
A second phase is expected to have another 115 lots with views of Lake Cameron from both the front of the house and the back of the house.

“The second phase of Dawson Creek will probably be the most spectacular views we’ve got overall throughout The Waters,” Brigham said. The homes are expected to range from the high $200,000s to the mid $500,000s.

“We’ve also got custom housing that’s between $1 million and $2 million, so it’s a really unique community in that you are truly a traditional neighborhood development in a sense that you’ve got a whole mixed bag of housing that’s accepted by a wide variety of the market,” Brigham said.

A walking bridge will connect Dawson Creek with Welch Cove and new amenities will include a playground and wooded park. The $500,000 Blue Heron Pool Club, which opened last year, is adjacent to Dawson Creek. That means easy access to the pool, pool house, pavilion, outdoor fireplace and bocce court. The zero-entry pool features a mushroom fountain and even has a lap swim area.

The newest hamlet is named after the Dawson family, who “helped rejuvenate this area,” Atkins said.

“We’re the real estate arm,” Brigham said about New Waters Realty. “We are purely developers providing lot inventory for our builders. They turn around and list their spec homes and custom homes with us through New Waters Realty.”

And speaking of spec homes – they do not stay on the market long at The Waters. “We are very fortunate that as soon as they are built they are sold,” Atkins said. There were two move-in ready homes in mid-February and three under construction.

The development has nearly reached its halfway mark with 400 homes out of a buildout estimated at 866 homes. Almost 500 lots have been developed.

With the new Pike Road School attracting families to The Waters, there will be an estimated 170 home sites and two hamlets near the school and the development’s two other lakes – the 18-acre Lake Sweet T and the 12-acre Jake Lake. The Waters even has what it calls a “Trail to Education,” where students can walk or bike or ride in a golf cart to go to school. Frazer United Methodist Church announced plans to hold services inside the school while a nondenominational church meets Sundays at the chapel, which is owned by two neighbors. The chapel is a rental venue for weddings and business meetings as well and is used for neighborhood meetings.

The land by the school and two smaller lakes – near the entrance of the development – will have commercial property, which may include a new location for New Waters Realty. The Waters has been contacted by a dry cleaner, bank and pizza restaurant in the past, according to Brigham. He expects to have businesses in place in the next 12 to 18 months. He said with more and more rooftops in Pike Road there is a need for additional retail.

That area may be developed before Dawson Creek is completed, Brigham said. 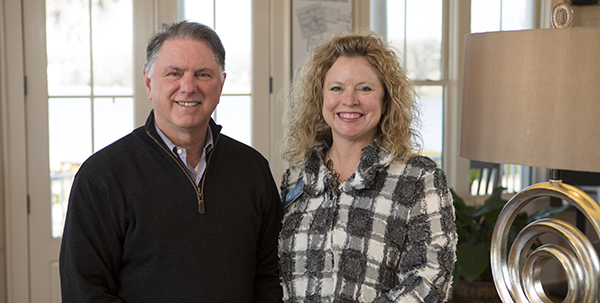